You may have wondered why Austria and Australia sound so similar, despite the fact that the two countries seem to have little in common with each other. They lie thousands of miles apart; Austria is a small landlocked country in central Europe, while Australia is a massive continent in the Southern hemisphere; Austria is mainly German speaking while Australia was settled mostly by the British. Convict jokes on the back of a postcard, please.

The resemblance in the names of these two countries has been noted, often with some humour. Does anyone remember the Simpsons episode set in Australia? 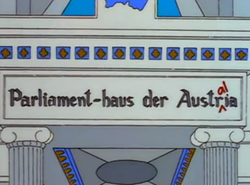 But why do the names of Austria and Australia sound so similar? After all, Australia wasn't settled by the Austrians! The resemblance is sort of coincidental, though not quite, because the aus- root in both countries does in fact share a common origin. But we have to go a long way back in time to unearth the connection between the two roots. Are you sitting comfortably? Good.

Australia comes from Latin (Terra) Australis, meaning ‘southern land’. Terra is the Latin word for ‘land’, and australis means ‘southern’. Legends of a Terra Australis Incognita, an 'unknown land of the South' date back to Roman times and were commonplace in medieval geography, although not based on any documented knowledge of the continent. Following European discovery, names for the Australian continent were often references to the famed Terra Australis. It was also called 'New Holland' before the name 'Australia' was officially adopted in 1824.

The Latin word australis is a derivative of auster, meaning ‘south wind’.

You might have noticed how similar auster looks to the Germanic root aus-to; is there any connection between the two roots?

Yes, these two words are related. They are both descended from the Indo-European root *aus- which meant ‘dawn’ or ‘to shine’. The shift in meaning to ‘south’ in Latin is understandable. The ancestors of the Romans would have known that the further south they travelled, the more intensely the sun seemed to shine (or burn, in the days before suntan lotion).

The Indo-European *aus- root is also found in Ancient Greek éōs, Sanskrit uṣā́h and Lithuanian aušra. All of these words mean ‘dawn’. The same root also turns up in Latin Aurōra (the goddess of the dawn) and Latvian austrumi (east). The Latin word for ‘gold’, aurum, also probably comes from the same root. After all, it is the metal that shines.

So, Austria and Australia have different meanings in their source languages, but the aus- root in both of these names comes from the same Indo-European source, albeit from different languages.

There you have it. Now you can tell everyone what Austria and Australia actually mean, and why they sound similar. Crikey!

A bonus fact: At the time of European settlement, Australia had between 200 and 300 indigenous languages. Today, only about 70 survive, and of these, only 18 are spoken by all age groups. This is a great shame, because Australian aboriginal languages are fascinating, at least for a language geek such as myself.
Posted by Jon's blog at 14:05